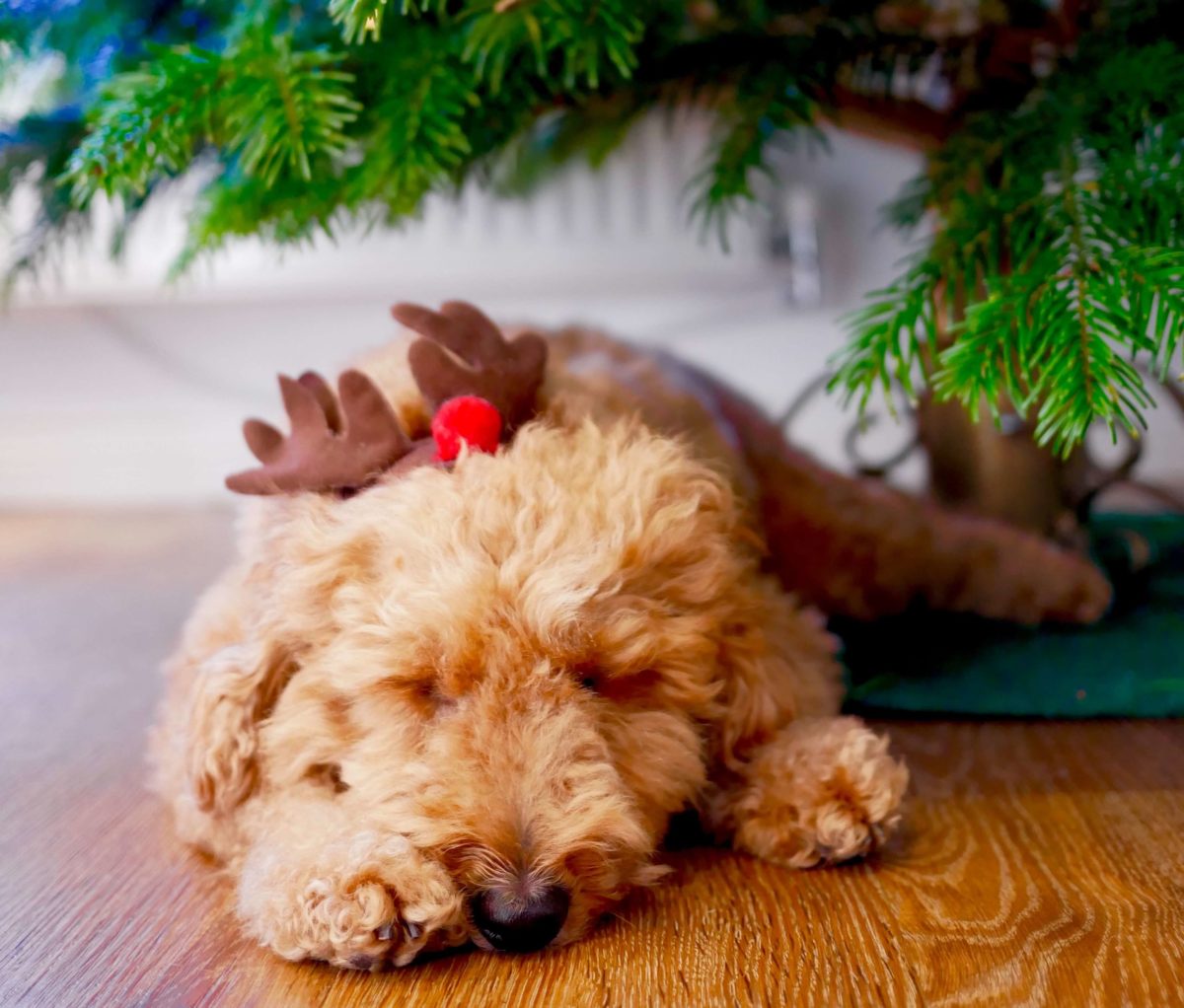 For us humans Christmas is a magical and exciting time but for dogs it can be a scary time. There are many things that could cause harm to your dog including decorations, certain Christmas presents, tasty food, plants and much more. Take a look at our list of hazardous items to look out for.

Cooked or uncooked onions, garlic, leeks, shallots and chives could damage the red blood cells resulting in anaemia. Symptoms to look out for are vomiting and diarrhoea.

Keep chocolate away from your pets during the festive period. Chocolate contains a compound called theobromine which is toxic to dogs and cats. The darker the chocolate the more theobromine it will contain. If eaten it can cause vomiting, diarrhoea, muscle tremors fits and heart issues which could be life threatening.

Christmas is a time for mince pies and fruit cake but like chocolate it’s best to keep these treats away from your dog as they contain grapes, raisins, currants & sultanas all of which are poisonous to dogs. If consumed it could cause vomiting, diarrhoea and delayed kidney failure.

Tis the season to be merry! Just like us, dogs can become wobbly and drowsy if they have alcohol and in severe cases it can cause liver and brain damage. So it’s best to keep alcohol out of reach from dogs.

Poinsettias are a popular Christmas plant and though the potency of this plant has often been exaggerated, it can still have some side effects. If ingested it could result in vomiting, diarrhoea or drooling. If exposed to skin it could cause irritation including redness, swelling and itching.

Although holly is considered to be of low toxicity, if swallowed the spikey leaves could cause physical damage and the berries could result in vomiting and diarrohea. Most dogs will smack their lips, drool or shake their head if ingested.

Hedera Helix, commonly known as English Ivy contains two steroids known as sapogenin and polyacetylene and if ingested it could result in upset stomachs, diarrohea and vomiting. If exposed to skin it could cause blistering, redness and swelling.

The berries from mistletoe contain polysaccharides, alkaloids, and lectins. If this is accidentally eaten it could result in drooling, vomiting, diarrohea, stomach pain and in severe cases death.

Like holly, Christmas trees are considered to be of low toxicity although the fir tree oils could irritate the mouth and stomach resulting in drooling or vomiting. If your dog accidentally swallows the needles from the tree, it could cause a mild stomach upset or internal damage because of the sharp tips.

Decorating your house for Christmas is fun, but this may not be the same for your dog. Tinsel could potentially obstruct your dogs stomach as would plastic ornaments. Glass ornaments could cause internal damage if chewed or swallowed. If chewed fairy lights can burn or electrocute your pet.

Everyone loves opening Christmas presents including the dog and although wrapping paper is low in toxicity, swallowing large amounts could potentially result in obstructing your dogs stomach. This is the same with children’s toys too.

Many Christmas gifts may require batteries but if your dog accidentally chews and swallows a battery it could result in chemical burns, and in severe cases heavy metal poisoning. Swallowing the battery the whole can cause a blockage, if it gets stuck in the throat or stomach it can produce an electric current which can damage the surrounding tissue.

If you suspect that your dog has been adventurous during the holidays and tried any of the above, contact your vet immediately.