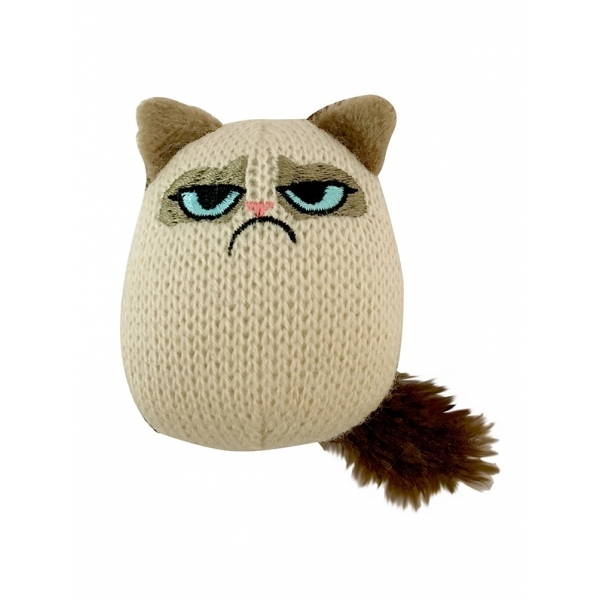 Grumpy Cat – the miserable moggy that changed everything

Sour-faced and ever so slightly freaky, Grumpy Cat took the world by storm. An internet celebrity extraordinaire, the miserable-looking moggy was the poster kitten for viral memes. She remains top of the feline pops and an iconic figure that attracted attention across the globe.

Grumpy Cat’s real name was Tardar Sauce, a name which is a little more memorable than Socks or kitty! But she will always be remembered as Grumpy Cat. Her unique expression was the result of feline dwarfism and an underbite. When a photograph of her looking particularly miserable was posted on Reddit in 2012, parodies created by Reddit subscribers quickly went viral.

Grumpy cat inspired a raft of hilariously cynical images. Her owner, Tabatha Bundesen was smart enough to realise she could capitalise on the popularity of her pet and the Victor Meldrew of felines became a profitable business. That unfortunate flat face and those crazy bubble eyes made Tardar Sauce superstar. She was a pioneer of meme culture although YouTube had already been built largely as a result of the popularity of cat videos.

Tabatha Bundesem left her job to manage her cat’s public appearances while her brother Bryan looked after the Grumpy Cat Website, Facebook, YouTube and Twitter accounts. The unique moggy garnered an amazing 8.3 million followers on Facebook! Her popularity led to her featuring in advertising campaigns for cat foods and Honey Nut Cheerios and she made several appearances on American TV shows. In 2013, Grumpy cat was even “interviewed” for Forbes Magazine!

Here is a clip of the Honey Cat Cheerios advert staring Grumpy Cat.

The most famous moggy on the planet

Tardar Sauce AKA Grumpy Cat became the most famous moggy on the planet. Unfortunately, she passed away recently following a urinary tract infection. She enjoyed seven years as a global celebrity and her legend lives on. At Cuddles, we are delighted to feature a wonderful collection of Grumpy Cat toys honouring a very special pet.

The passing of Grumpy Cat has dealt a double blow to Tabatha Bundesen. Not only has she lost her treasured pet, she has also suffered an enormous financial setback. The income generated by a popular pet cannot be insured against the animal’s premature demise. Rumours suggest that Tardar Sauce may have generated as much as $99.5 million. Tabatha Bundesen disputes this estimate but there is no doubt that her cat was a money spinner.

If you have an unusually adorable or amusing pet, you can expect to earn up to $15,000 for a social media post if you can accumulate more than 100,000 followers. Pet influencers can make big bucks for their owners but it takes time and effort to raise their profile and to gain those lucrative licensing deals.

The unforgettable Grumpy Cat made memes popular but Grumpy Cat Limited demonstrated that this popularity could be monetised. The business sparked internet intellectual property disputes and these laid the ground for the disputes we see today which threaten the freedom of meme culture. A diminutive cat changed online culture and will always be considered a significant figure in the history of social media.